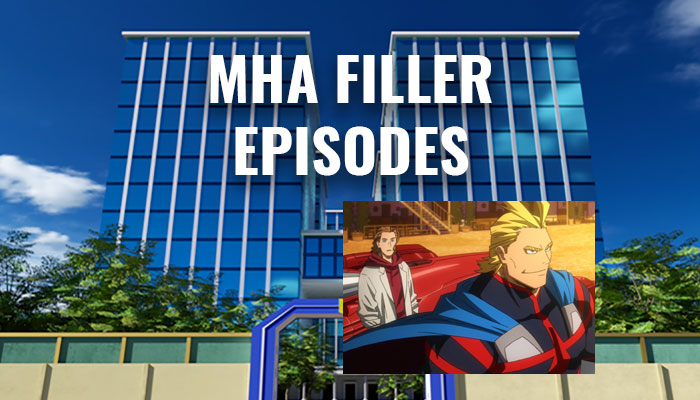 Why Do Animes Have Fillers?

First, an anime might have caught up to the manga. Studios will add filler episodes to give manga authors some space to draw and write. This is especially true for year-round animes like Naruto and Bleach.

In some cases like Dragon Ball Super, which is a monthly manga, the anime materials go out before the manga.

Second, fillers can be used to add context to the story. Characters and their development can be explored further through anime. Fillers let us dive into things that are hinted or quickly glossed over in a manga page.

Third, is to add marketing material. This is used to either sell merchandise or sell manga fans to jump on the anime or movies.

Why Does Boku no Hero Academia Have so Few Filler Episodes?

With only four full filler episodes out of a total of four seasons, BNHA has a lot less than other shows like Naruto, Bleach, and Dragon Ball Z.

Part of the reason why there are so few fillers is that BNHA is a seasonal anime. Unlike Naruto that ran all year, BNHA is on for a season and then takes a break. This gives the author, Horikoshi, time to write the manga. The anime never catches up and the studio isn’t forced to add non-canon content.

The episode starts with Izuku in the hospital after sustaining injuries in the fight with Stain. Tenya and Shoutu weren’t as injured, so they leave the hospital. Izuku is left to think about how his classmates are doing.

The rest of the episode follows Tsuyu/Froppy on a mission with pro hero Selkie and his sidekick Sirius. On their mission, they do battle with the villain Innsmouth. In the end, Tsuyu helps capture Innsmouth.

In the season 3 premiere, the students of class 1A end up using the school pool and doing endurance training. The boys engage in a friendly competition to see who is the fastest. Before they can finish, Aizawa, kicks them out of the pool.

Episode 58 – Special Episode: Save the World with Love!

This special episode briefly sets up the MHA: Two Heroes movie. The episode starts with All Might catching a TV series about his time in America. He reminisces about his friend David Shield.

The students do a special class where they train through a live bank robbery/love-story scenario with teachers. After training, All Might checks his email. He receives a message from Melissa Shield asking him to go to I-Island.

The whole episode sets up the MHA movie. Make sure you read our article on whether or not Two Heroes is canon.

In this episode freelance journalist, Taneo Tokuda, deduces that All Might’s successor is a student at U.A. High. He goes to the school to interview students who are under the false impression that Tokuda is doing a piece on students’ life at the dorms.