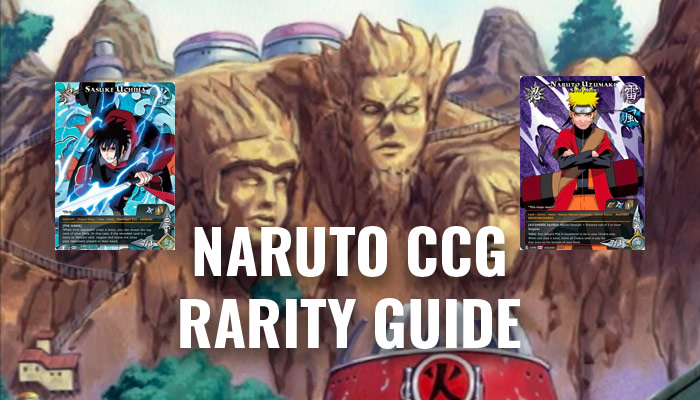 The Naruto collectible card game was a card game created by Bandai that was published from 2006-2013 and was based on the shonen anime. With the game being out of print for so long, it can be kind of hard to figure out the rarity of cards if you’re just getting into the hobby.

This guide is for the official Bandai card game. For Kayou Naruto cards go to this article instead.

How can you tell if a Naruto card is rare?

The dots at the bottom of each card denote the rarity. There are four main levels of rarity in the game.

The easiest cards to pull out of booster packs. Common cards are denoted by having no dots at the bottom of the card.

One dot means that a card is uncommon. Uncommon cards are only slightly more rare that common, but are still considered “bulk” cards.

Two dots indicate that a card is rare. Rare cards also have gold or rainbow lettering on the name.

Three dots mean that a card is a super rare. Super rares have gold text and gold foiling on the card. These are the hardest regular cards to pull with about a 1/12 or 1/6 chance to pull from a booster pack depending on the set.

If the dots are red instead of white that means that the card came from a premade starter deck. Since they came in decks, starter super rares, aren’t as rare as regular supers.

Common, uncommon, and rare cards can also come as foiled with the name of the card non-foiled. These are one per pack unless the pack contains a super rare, which takes the foil spot.